October; A month in photo 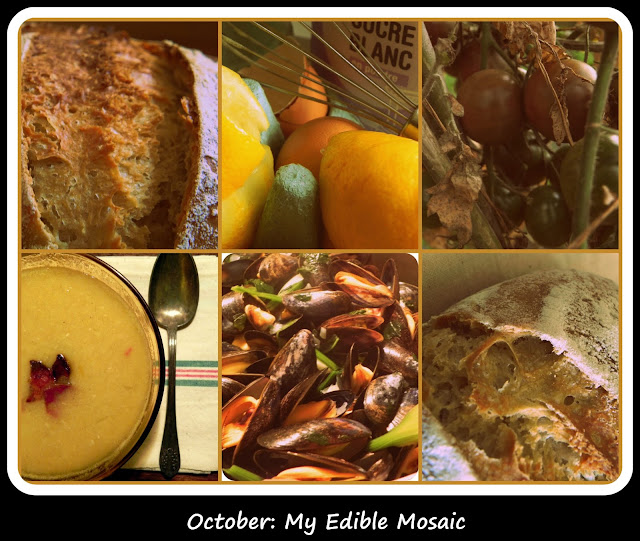 We had our last harvest of tomatoes from....Ahem, our balcony. They were potted that's why we didn't get many and they were not big. they might be smaller in size compare to store bought but they have all the taste minus all the sprays. Mine were simply yum...

September/October was also the season for Mussels. I cooked mussels many ways, Mussels in garlic herb bread crumbs, the classic Moules Marinieres (as shown in picture) or simply steam mussels with french vinaigrette.

Soup is something we have for every dinner all year round. During the summer it would be something light, mostly vegetable soup or Le Miget/ Migé but came October, we had creamy Lima beans soup with some Chorizo chips to gives textures and saltiness (picture above) and pumpkin soup of course.

I did a few desserts too, mostly tarts apples, pear and chocolates. But the lemon above was a Lemon Curd Tart simply to prolong the taste of summer.

All these were accompanied by a few French country, Ciabatta or Buckwheat sourdough loaves from my own oven.

What about you? what comes out of your kitchen? Wishing you a Happy November...
xoxoxoSylvia

Hopping over to Simple as that - A month in photo

Email ThisBlogThis!Share to TwitterShare to FacebookShare to Pinterest
Labels: A month in photo

Nyonya
Angers, France
My name is Sylvia. I'm a Malaysian not living in Malaysia but missing Malaysian food. This is my little diary about my adventure of preparing food that not just to satisfied my craving but also to please my French husband and my MIL.